The Embark Investor Confidence Barometer has revealed that record numbers of investors are satisfied with their financial advisers. However, despite this, adviser confidence has dropped significantly since last year with advisers worried about the future of the market and their ability to remain profitable.

The Confidence Barometer, a twice yearly survey of 1000 people conducted by Censuswide for the Embark Group (Embark), a leading UK retirement solutions provider, discovered that advised investor satisfaction is surging. 85% of advised investors surveyed were satisfied with their financial adviser, while only 4% described themselves as dissatisfied. This marks a significant increase from the previous Barometer, in which 68% reported satisfaction, and 8% said that they were dissatisfied.

86% of those surveyed cited their adviser’s ability to understand their needs as the area they were most satisfied with, while 84% said it was overall communication. 81% of advised consumers said they were satisfied with the investment recommendations offered by their advisers. The results also suggest that this surging satisfaction could generate new business, with the vast majority (83%) saying they would be comfortable recommending their adviser to friends and family, with only 5% uncomfortable.

Furthermore, when asked about the positive outcomes of the COVID-19 pandemic, almost half (42%) of advised investors surveyed said that they had developed a better appreciation of financial planning due to the disruption of the past two years.

This should all point to an optimistic landscape however adviser confidence appears shaken since last year’s Barometer. Only 61% of advisers surveyed agree‡ they were confident in their ability to charge enough, compared with 80% last year. Similarly confidence in the future of the advice market has dropped from 81% to 69% this year.

Male advisers surveyed in particular are less optimistic than their female counterparts. Confidence among men in their ability to continue to charge enough was 53% with 31% neutral, whilst among female advisers confidence was 75% with 11% neutral.

Jamie Drewett, Group Head of Distribution at Embark, said:  “Our results suggest some advisers may be going through a turbulent – even a confusing – time. If clients are highly satisfied with their adviser, and if the last couple of years has even helped to boost appreciation of the value of advice, why aren’t they feeling more optimistic?

Anecdotally, advisers are telling us that price pressure from the self-serve market, rising professional indemnity and FCA costs, and even the weight of MiFID compliance, are affecting confidence.

However, advisers will always have one strong reason to believe in the health of the market – the value of advice. Advisers we have spoken to have been clear that, while there will always be a conversation to be had on costs, it does not need to be a differentiator.” 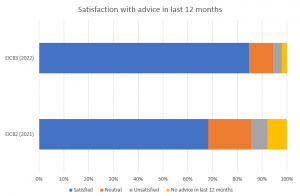