Beyond ESG: The Spectrum of Capital

The Spectrum of Capital is used in investing circles to explain the different approaches to investing when other issues such as ethics and sustainability are considered on top of the financial analysis. IFA Magazine spoke to Wayne Bishop CEO of KSAM marking the 10 year anniversary of its MPS.

King and Shaxson (KSAM) have been managing ethical portfolios since 2002, and with the flagship Model Portfolio Service (MPS) celebrating its tenth anniversary in 2020, now seemed the opportune moment to talk about topicality and transparency in the ESG sector.

A key point raised is the outset by Wayne Bishop, KSAM’s Chief Executive Officer, is that ethical investing isn’t a new concept. He reminds us that the first ethical screen arose back in 1758, although exclusions at that time by the Quakers, were driven in terms of their faith. The market has certainly come a long way since then and over the past decade the universe of available assets has grown dramatically.

When MPS first launched, the availability of ethical investible assets was limited; for every fund that passed KSAM’s screen many, many more did not. Now the market has changed. Over the last 5 years we have seen ESG outperform and in the opening eight months of 2020 saw environmental, social & governance (ESG) funds outpace their conventional rivals by as much as 20 percentage points, according to research by Trustnet. 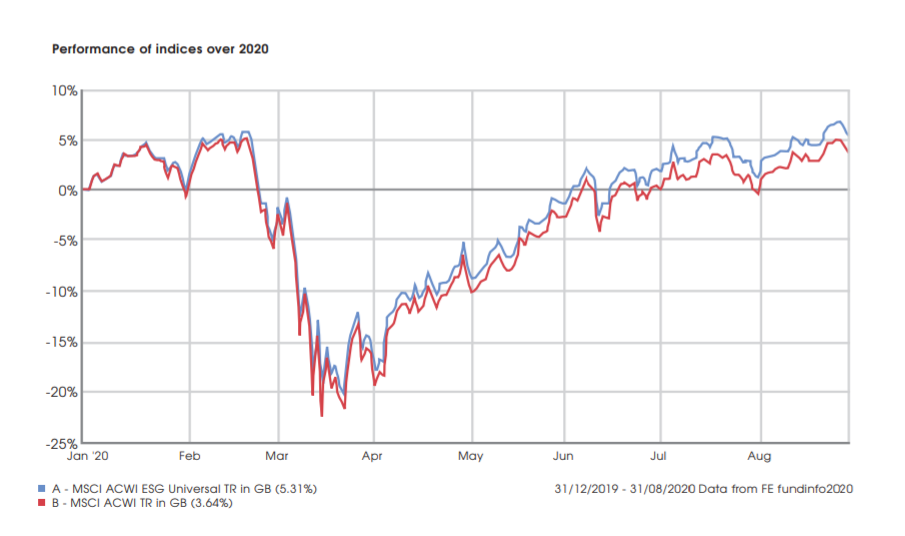 According to Bishop, over the last decade ‘the myth that ESG investment meant sacrificing returns has been debunked.’ The phrase ‘Ethical Investing’ can sometimes make people think of avoidance, but there is a strong focus on the positive as well. KSAM does maintain a rigorous negative screen to avoid various ‘sin’ stocks, however the eco-system of available ethical opportunities has flourished since MPS started in 2002.

ESG investing has not only outperformed, but has done so with lower volatility. A key factor behind this, according to Bishop, are the oil and gas, mining and financial sectors, which are dominant in many indices but either lower or fully absent in ESG investments. Exposure to commodity prices has made mainstream indices more volatile sectors, and at the same time these three sectors have lagged the markets for a number of years. This accounts for a large part of the outperformance of ESG. Over time we will see the weighting and influence of these traditional sectors decline and we expect the gap in performance to narrow.

Whilst demand for ESG has often grabbed the headlines, as well as the rapid increase in the number and range of funds, one other key fact has been overlooked; the maturing of many of the favoured ESG sectors. At the turn of the century, wind energy was marginal and uneconomic without subsidies and investing in wind turbine companies such as Vestas Wind Systems was considered risky and optimistic while the concept of investing in solar farms in the UK would have been considered lunacy. Today, wind is a mature sector and Vestas is considered a more mature investment. In addition to the turbine developers and manufacturers, yield based investments in wind and solar farm operators (including those based in the UK) are available, and have proved to be resilient investments over the COVID crisis.

As Bishop explains further, “for years we were frustrated as investors, that one of the leading offshore wind farm developers and owners, Danish Oil and Natural Gas (DONG) was off limits from an ethical perspective. They changed focus and rapidly began disposing of their fossil fuel interests, renaming themselves Orsted. Not only has been good from an ESG perspective, it has been very good for shareholders.”

An increasing number of sectors nowadays have more viable investment options. To name but a few; social housing, better food ingredients (as well as vegan meat alternatives) and electric mobility.