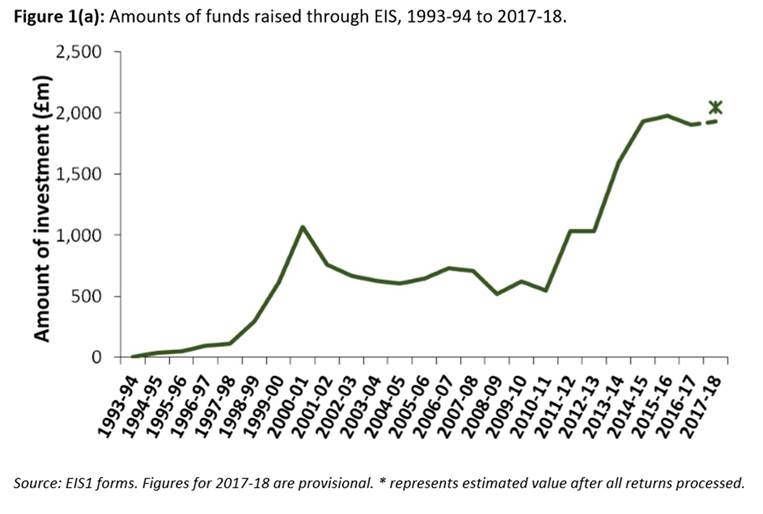 “The last decade or so has seen a boom in EIS investments, with savers scrabbling to benefit from the 30% tax relief on offer.

“Companies based in London and the South East have perhaps unsurprisingly been the biggest winners, scooping up two-thirds of the available EIS investment cash in 2017/18. A similar trend has been reported where companies seek funding through the Seed Enterprise Investment Scheme.

“Clearly the increase in tax relief on EIS investments from 20% to 30% in 2011/12 will have had a significant impact on demand in recent years. However, there are two other developments that have contributed to the burgeoning EIS and SEIS markets.

“At the lower end, the rise of crowdfunding websites such as Seedrs and Crowdcube makes it easier than ever for those with small funds to dip their toes in the world of direct investment. When it comes to SEIS, for example, over half (58%) of investors claiming tax relief invested £10,000 or less, with over 1 in 10 investing £500 or less.

“At the other end of the spectrum, the dramatic erosion of pension tax relief allowances since 2010 is likely to have encouraged many wealthier investors to seek alternative homes for their
hard-earned cash.

“In particular the cut in the lifetime allowance from £1.8 million to £1,055,000, the reduction in the annual allowance from £255,000 to £40,000, and the introduction of the hideously complex annual allowance taper will inevitably have pushed many to seek out savings alternatives. In this environment the 30% tax relief on offer through EIS and 50% through SEIS are understandably attractive.

“Investors considering going down this route need to make sure they understand the rules and the risks they are taking.

“The incentives on offer through EIS and SEIS exist because the companies are generally start-ups and therefore have a higher chance of failure. As such, it is possible that you will get back less than you put in initially – even when generous tax benefits are taken into account.”

Everything you always wanted to know around the IHT space

How Alan’s adviser helped with his IHT liability

CPD – Getting to grips with the residence nil-rate band

Do you need to attend this webinar?

Do NOT follow this link or you will be banned from the site!
Powered by Convert Pro