Covid-19 caused the most dramatic hit to corporate revenues and profits on record, according to the new UK Profit Index from active investment manager J O Hambro Capital Management. However, a strong turnaround has now begun.

The pandemic caused a record decline in UK plc revenues

The pandemic caused a record decline in the revenues of the UK’s listed companies. The latest set of company results shows that sales fell 19% or £349bn in the 12 months to the end of March 2021.

The impact was deeper than any downturn in recent history – eight times bigger than during the global financial crisis.

And it was more widespread – never before have more than half of all companies seen sales fall, yet during the Covid-19 recession this happened for four quarters in a row. In real terms, UK plc revenues were no larger over the last 12 months than they were in 2009.

Oil revenues fell furthest, down 41% or £158bn, accounting for almost half the decline due to the collapse in oil prices.

Consumer discretionary sectors lost a third of their sales (-31%), with travel and leisure companies hardest hit, losing three fifths of their revenues to travel bans and hospitality closures.

Housebuilders, mining groups, banks and media companies were all among those to see double-digit declines.

The profit squeeze was unprecedented

Lower sales and Covid costs caused an unprecedented profit squeeze. The most notable individual quarter was the first three months of full lockdown, when 46% of companies posted outright losses, a proportion never seen before.

But J O Hambro’s research showed that the low point was reached in September. Since then companies have adapted and though sales remained under pressure for a time, profits began to recover quickly.

By the early spring, UK plc reported revenues only 5.8% lower by comparison to the equivalent quarter in 2020, the last one before the pandemic struck in earnest.

Banks, oil and mining companies have made the strongest contribution to the recovery so far as they were hit first.

Building materials, industrials and even general retail also enjoyed a significant rebound in profits and even the battered travel and leisure sector has significantly pared back its losses. 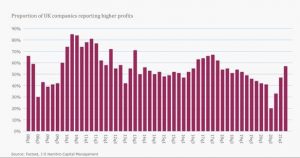 Dramatic recovery will be evident in the summer reporting season; profits should double by spring 2022

In the next set of results for trading up to the end of June, which will be published over the summer, J O Hambro believes there will be an unprecedented recovery in UK company profits, in both scale and speed.

As high-conviction stock pickers, J O Hambro’s fund managers do not focus on earnings for the whole market, but as a guide, the recovery means that UK plc earnings should roughly double to around £110bn in the 12 months to March 2022, and they should regain their pre-pandemic levels within another year.

“After the shock of the pandemic the change of mood in Britain’s boardrooms is palpable. The recovery is now very strong indeed: high government spending, low interest rates, strong consumer demand, resurgent employment and a buoyant housing market mean that profits are now growing very fast, much faster than market expectations.

“Surging profits are complemented by enticing valuations. All four J O Hambro UK equities teams agree that UK shares are attractively priced at present, both compared to historic levels and international peers. Valuations across the stock market appear cheap, and in some segments very cheap. Our fund managers are not simply interested in the cyclical upswing, however. They are looking for the companies that are honing themselves an edge for the long term, too. And they are finding them.”

The rise in professional standards and quality of advice