“Markets are still pricing in a UK rate rise next week, and a series of hikes throughout the year, but the reality is that no-one knows how the Ukraine crisis will affect the thinking of the rate setting committee. On the face of it, the inflationary pressures caused by higher energy prices clearly make a case for tighter monetary policy, and this seems to be logic followed by the market. But the energy price shock to the global economy also raises the chance of a slowdown, or worse still, a recession. Seeing as monetary policy decisions take about eighteen months to reach the peak of their effect, the Bank of England may now be looking forward to 2023 with more trepidation, and that could cause some reluctance to tighten policy aggressively.

“Indeed, if we look at bond rates in the US, the gap between the yield on the 10 year government bond and the 2 year bond currently sits at its lowest level since March 2020, when the emergence of the first COVID wave rocked global markets (see chart below). The gap reflects the difference between short and long term expectations for interest rates, and the economy. A thin differential between the 2 year and 10 year yield suggests the US bond markets thinks we’re in for some steep interest rate rises in the short term, but that the economic outlook beyond the two year horizon isn’t strong enough to warrant much tighter monetary policy.

“In the next meeting we may see more caution from the Bank of England, though for the moment that’s most likely to feed into the commentary accompanying the interest rate decision, rather than affecting the decision itself. Last month, four of the nine members of the MPC actually voted to increase base rate to 0.75%, which sets a hawkish baseline for expectations this time around. In the longer term the Bank may find itself wedged between a rock and a hard place, faced with an unpalatable choice between fighting inflation and supporting the economy. For now though, the smart money remains on the Bank of England following through on interest rate rises, but the Ukraine crisis has heightened the chances of a policy error in both directions.” 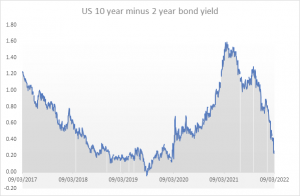