M&G’s Richard Woolnough: Are we at the economic crossroads of recession?

By Richard Woolnough, manager of the M&G Optimal Income Fund

Given the next stage of the monetary cycle is set to be a period of tightening to slow the economy and suppress inflation, it makes sense for us to analyse the probability of recession as they bring significant rate and credit volatility. Our working theory has been that you need 3 economic signals to create a recession outcome. 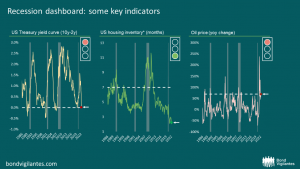 From the above we can see the warning signs are there, however we do not have three red lights. Let’s explore the three warning signals individually. Are they as reliable as in the past and is recession around the corner?

If we think of the US economy as being faced with a set of traffic lights, at first glance, we hit two red lights and a green. Not a unanimous outcome, but given that the last few years have not exactly been normal from an economic point of view, let’s explore a pessimistic and an optimistic scenario.

The pessimistic scenario would claim that the yield curve is the dominant indicator and the current green light in the housing market could promptly turn red. The argument would be that the last 2 years have resulted in a rapid bubble of housing consumption, due to the unusual monetary policy we have had and the change in consumer behaviour during lockdown. At its simple level, it would seem that if you are to stay at home, you are prepared to spend more of your wealth and future wealth on a home. Undoubtedly, it has been very different this time and therefore this indicator might be unreliable or could rapidly turn red as the economy opens up and the housing bubble ends, and so it is a green light we should ignore.

On the optimistic side, the “it’s different this time” argument would say that the yield curve is no longer a true predictor, as its signalling ability is severely impaired by central bank intervention that has forced long term rates lower due to the Quantitative Easing (QE). This would be best typified by the argument that term premium has been crushed by QE, and therefore we should arguably ignore this red light.

With regard to the oil price traffic signal, currently set to red, one could argue that the dominant, pre-Ukraine related, percentage rise in price was simply a rebound from the COVID oil price crash, and should therefore also be ignored. This is akin to the central bank argument of a transitory temporary rise in price COVID narrative.

All the above arguments have merit, so let’s try to find some other indicators of economic strength that might give us a guide as to whether or not a recession is around the corner.

A recession is defined as two consecutive quarters of negative economic growth, and we care about recession as it increases the level of unemployment. Therefore, I think the first port of call should be an examination of the current state of the labour market. We have used the chart below many times to illustrate how healthy the US economy was/is, as it depicts the excess supply or demand for labour. 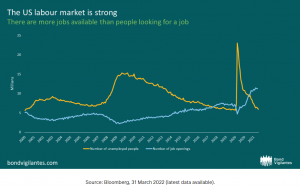 The economy will slow as the Fed tightens monetary policy working with its usual delay. Economic growth will also be limited as being at full employment potential growth is  – by definition – curtailed by the lack of supply of labour.

From my perspective I think that recession remains unlikely in the near term. This means monetary policy can continue to be tightened, and credit does not need to price in a default cycle in the near future. We will continue to closely monitor the three signals above, and to examine them all on a more detailed basis in future blogs.