Households reined in spending during August as the realities of rising costs took their toll on what is traditionally one of the biggest months of the year for spending, the latest Nationwide Spending Report shows.

But it also reveals the nation has not yet given up going out as spending continues to rise for eating and drinking and leisure and recreation, accounting for one in every four pounds spent on non-essentials.

Essential spending snapshot: There was more than £3.8 billion of essential spending in August, which was down very slightly (-1%) on July. However, it was up 12 per cent year-on-year. Spending to pay down debt in August was up month-on-month (+4%) and annually (+18%) as people who have turned to credit cards, for example, look to pay off their previous spending. Expenditure on rent payments has increased compared to last year (+17% vs August) and compared to last month (+7% vs July).

The average transaction value for rent payments is £276.113, which is nine per cent higher than August last year. In supermarkets, although the number of transactions in August was up 11 per cent from last year, spending is only up six per cent. In fact, month-on-month, both the number of transactions and amount spent in supermarkets was down four per cent in July. With the school summer holiday season being in full swing, spending on childcare in August naturally fell compared to July, by 52 per cent. Despite this, childcare spending was actually 39 per cent higher than in August last year – perhaps reflective of the current higher cost of childcare.

Non-essential spending snapshot: August saw a slight drop (-1%) in non-essential spending, although it remained close to £3 billion and eight per cent higher than 12 months previously. The number of non-essential transactions remained broadly flat month-on-month, but seven per cent higher than last year. Continuing a trend that has been seen previously, spending on dating, DIY, gardening and subscriptions continues to see cutbacks with all four categories seeing a drop in spending compared to both last month and last year. However, in a nod to trying to enjoy life, there continues to be growth in spending in areas like eating and drinking out (+4% vs July +8% vs August 2021) and leisure and recreation (+6% vs July; +3% vs August 2021). Although digital goods only saw a one per cent month-on-month growth in spending, it was actually 21 per cent higher than last year, with console games accounting for a large percentage of that spend.

Mark Nalder, Head of Payments at Nationwide Building Society, said: “As inflation continues to bite and we edge ever closer to a winter of rising bills, it’s perhaps no surprise to see spending starting to taper, particularly for non-essentials, where we’ve seen annual growth fall significantly from 14 per cent in July to just eight per cent in August.

“The continued drop in discretionary spending on areas such as DIY, gardening and subscriptions suggest people are reviewing what they can live without or can reduce. However, it’s clear from our latest data that many households are attempting to balance saving money with continuing to live and enjoy life. This is evidenced by the fact that spending on socialising and leisure continues to grow, accounting for around one in every four pounds spent on non-essentials in August. The fine weather and holiday season clearly contributed to this as people went out and enjoyed themselves. However, as autumn sets in, we expect households to react more acutely as people prepare themselves for increased energy bills and the Christmas period.” 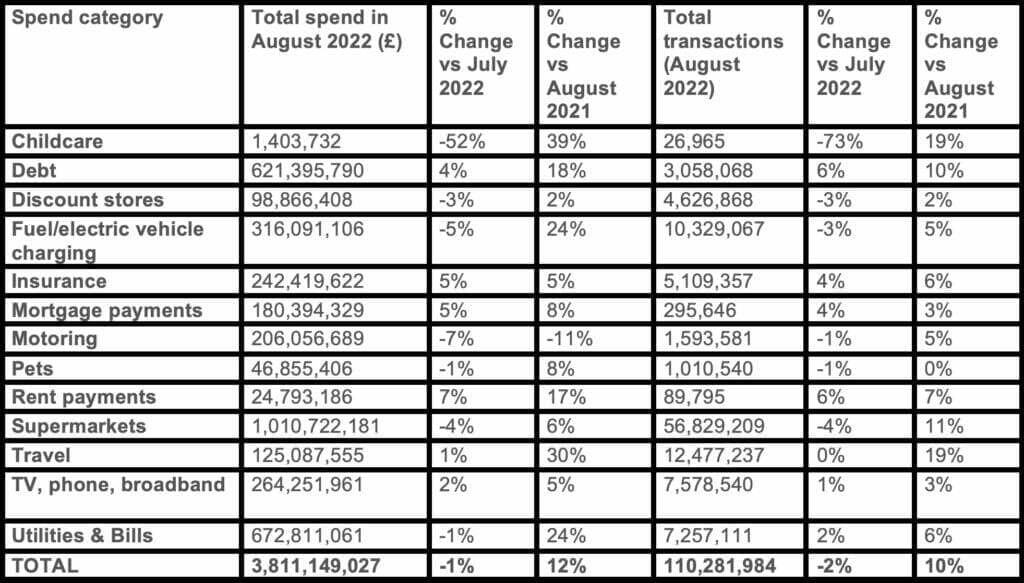 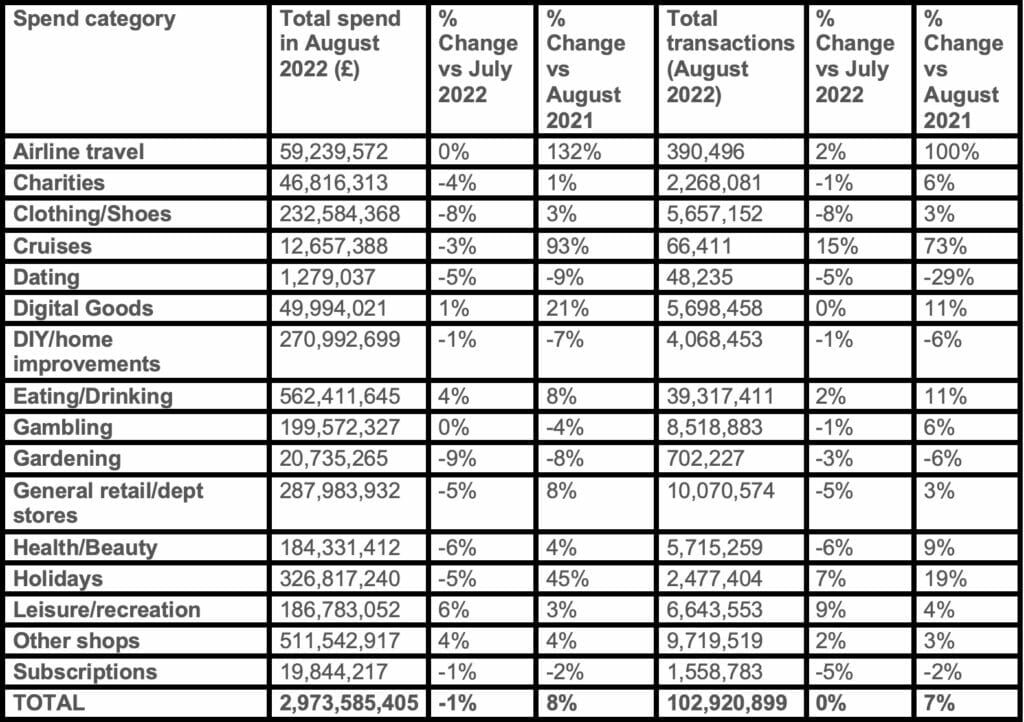 In August, Nationwide Building Society launched a freephone hotline to support members struggling with the rising cost-of-living. Members can speak to a dedicated team of trained experts based across the Society’s main branches. The service is available from 9am-4.30pm weekdays and 9am-12pm Saturdays. Nationwide aims to answer calls to the hotline within ten minutes. Outbound calls will also be made and, in October, Nationwide’s cost-of-living experts will be able to offer face-to-face, telephone and video appointments. The Society also encourages anyone in financial hardship should contact their bank or building society for support.