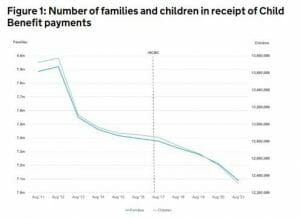 The large majority of child benefit claimants are women, so the drop in claimant numbers mean it is mothers who are now missing out on the vital National Insurance credits which they could be receiving by claiming Child Benefit. Many families may not realise that even if they do not want to risk facing a High Income Child Benefit Charge they can simply claim the NI credits without receiving child benefit itself.

Even if families realise that they have been missing out, HMRC will only allow claims to be backdated for three months. This means that mothers could be missing out on many years of NI credits towards their state pension and may be too late to fix the problem.

A woman who started a family in early 2013 and decided not to claim Child Benefit could by now have missed out on up to nine years of NI credits (2013/14 to 2021/22 inclusive). In a worst case scenario she could miss out on 9/35 of her state pension (because 35 years of contributions or credits are needed for a full state pension). At current rates this is a state pension shortfall of around £2,400 per year or around £50,000 in missed pension over the course of a typical retirement.

“These latest figures represent a ‘slow motion car crash’ when it comes to women’s state pensions. The creation of the ‘High Income Child Benefit Charge’ in 2013 has led to a steep decline in the number of mothers claiming Child Benefit and in particular in the numbers benefiting from National Insurance credits for time at home with children.  Without these credits, women could be losing thousands of pounds in retirement income. As a matter of urgency, HMRC should scrap its rules on backdating claims so that mothers who realise they have missed out can claim their missing NI credits. But there needs to be a fundamental rethink of the way parent at home with children get their state pension rights protected as the current system is clearly seriously broken”.