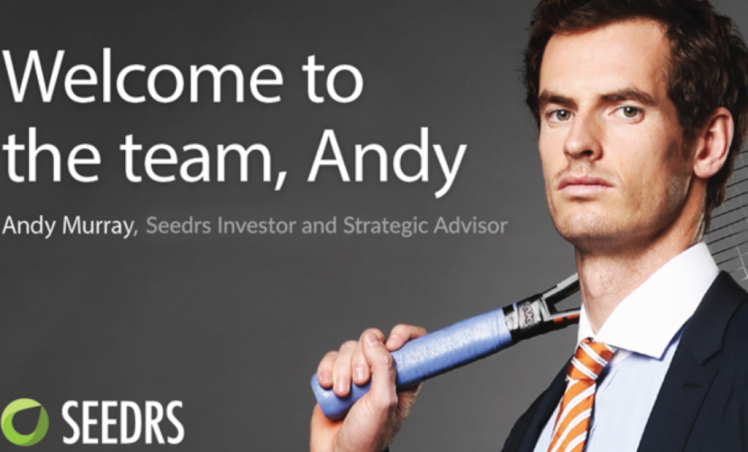 And these latest investments push Seedrs past the £200 million invested milestone.

This time Murray’s directing his serves at three ambitious British fledgling companies: MacRebur, VPAR and Bijou Commerce. The amount he’s invested in each was not disclosed.

The Scottish startup MacRebur is a Richard Branson backed business that makes roads out of waste. It produces a patented bitumen replacement that results in stronger and longer lasting roads. The trio of Scottish-based founders are at the forefront of a revolution to improve all roads, sort out potholes and create a new arm of recycling.

VPAR, the golf technology platform, is doing its best to revolutionize the golf experience for a new audience. It won Best Sports App at the Sports Technology Awards beating Chelsea FC and The Wimbledon Championships.

So far VPAR has raised £1.15 million from almost 300 individual investors including Eden Rock Capital’s CEO James Matthews and is currently overfunding on Seedrs.

Bijou Commerce is a SaaS based mobile commerce platform for leading retailers. It’s mission is to transform the way retailers, brands and publishers engage, retain and monetise their customers’ on mobile.

It has only just gone live on Seedrs, but has already hit 80% of its funding target with £642,000 invested from investors including retail mogul Tom Singh.

Murray said: “I’m continuing to grow my portfolio through Seedrs and have tried to choose companies that I inspire me from as many different sectors as possible. I was interested in MacRebur because I am really impressed by their ambition to make a massive economic and environmental difference to road construction worldwide.

“VPAR appealed me because I enjoy golf and it’s something I could see myself using once I finish playing tennis, and Bijou Commerce is a ground-breaking tech company which will hopefully revolutionise retail.”

CEO and co-founder of MacRebur Toby McCartney said: “The last few weeks have been incredible as more and more people have got on board with MacRebur from around Britain and also Italy, Spain, France, Germany, Latvia and Portugal. To say we are all delighted that our Scottish hero, Andy Murray has now invested in MacRebur through Seedrs would be an understatement. We’re staggered at our final amount and so proud at what we’ve achieved so far. Fingers crossed we can persuade Andy to let us pave his driveway at Cromlix House.”

CEO of VPAR Jason Stoop said: “Our technology is used by some of the leading sporting talent in the world and so we are absolutely thrilled to have the tennis world number one believing in VPAR and investing. For us to have Andy Murray as a shareholder is incredibly humbling, and since we understand the 18th hole at Dunblane New Golf Club is named after him, we are hoping he will join us for a round of golf very soon!”

Founder of Bijou Commerce Olly Cooper said: “We are overwhelmed to have a tennis legend like Andy Murray invest in the campaign as part of the crowd. We are only a few days into our raise but so many members of our community have backed Bijou Commerce, all of whom will play a part in our future success and we can’t wait to hit our funding target in the coming weeks.”

CEO and co-founder of Seedrs Jeff Lynn said: “We are delighted that Andy continues to be so active in early-stage investment and his recent investments on Seedrs into MacRebur, VPAR and Bijou Commerce reaffirm this. His investments have helped Seedrs to exceed a new milestone, with over £200 million invested into campaigns on the platform. Andy is a great example of an investor who understands this asset class and the importance of building a broad investment portfolio, into which these three game-changing brands within their subsequent sectors will add even more diversity.”