Thrifty business: Mark O’Hara, founder of Thrift, talks to us about business success

IFA Magazine talks to Mark O’Hara, founder of Thrift, about the development of the business and how the support received from Nova has helped to underpin its success.

I was passionate about Rugby League, playing for Scotland under-18s. I focused totally on sport, failing most GCSEs, but learning discipline and perseverance!

I still managed to recover and get to university, studying Sports Development. I then went into sports nutrition and supplements, and soon found myself managing an online sports nutrition business for a subsidiary of Tesco.

What gave you the idea for the business?

While I was with the sports nutrition business, I had the idea for Thrift, as we wrestled with what would sell online and what would be most profitable. But at the time, I was too busy to do anything with the idea, and moved on to Simply Health, and then Holland & Barrett. I then became ill with pneumonia, and had an enforced rest for three months which gave me time to stop and think!

So what does Thrift offer?

Very simply, Thrift lets you know what your unwanted and unused items are worth across the resale market, such as eBay, Amazon, Depop and Facebook, which platform is most appropriate and then lets you upload to your chosen Marketplaces. We are making the second-hand market transparent so that people can sell more and earn more themselves. Currently, there are 9 million people in the UK selling things online, forecast to grow to 12 million by 2030. And in the US there are currently 58 million people doing it, and growing. Yes, we are thinking internationally!

Charities and other retail outlets are important as strategic partners for our early development, but the big market is that of these millions of general consumers.

What problems and challenges did you encounter?

I first took the idea to Lancaster University, but what I needed was too technically challenging for students. These were significant challenges and in the early days the tech team at Nova (Nova Cofoundery Limited) was not sure that they could produce the algorithm that operated cost-effectively. In fact, had I known the challenges we faced, I am not sure I would have started. But Nova persevered, and we now have the right working algorithm.

The other major challenge was building a robust panel for user-testing to prove the effectiveness of what we were building. The turning point was when we got a charity retailer interested in what we are doing, and we could then access their stores and their staff for the testing.

Has Covid-19 had any significant impact on your business?

Overall, we have been very fortunate. We had done much of the preparation work with a charity, the British Heart Foundation, when the pandemic arrived in earnest. The intervening time has allowed us to refine what we are doing and plan for a major test. When the charity shops open again, we are now ready to launch a four-week test across five of their branches.

Charities receive many bags of stuff every week. Using Thrift, they will know what is best to sell in store, what online, and how much they should get from it. It is far superior to their current methods, which is done by guesswork and is often inaccurate. It will also indicate which online marketplace is likely to yield the best profit for each item.

So how did you come across Nova?

That was simple. My wife saw an ad from Nova Cofoundery, and I sent in the concept of what I was looking to build. They liked the idea, and things moved rapidly from then on.

What difference has Nova made?

The difference that Nova has made has been massive. It was not just the financial investment from Nova Growth Capital, although that was very important, they gave me a development team from Nova Cofoundery to work with. They also made me focus on delivering value for the clients, through the lean processes they use. They have also pushed me to deliver a better proposition, challenged me harder, and made me think bigger, including internationally.

What does the future hold?

Undoubtedly more trials, then talking to more charities and then taking it into other retailers that want to trade online post-Covid.

And after that we are very excited about the scale and potential in America. Initial discussions have been met with great enthusiasm! 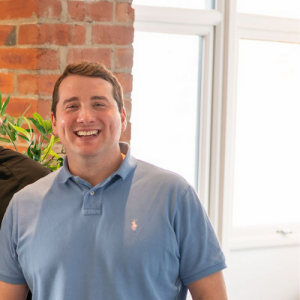 “Mark’s idea is absolutely the right product for the times we live in. Mark has stuck with it through alengthy learning and testing phase, and we are now very excited about the global potential of this product.”