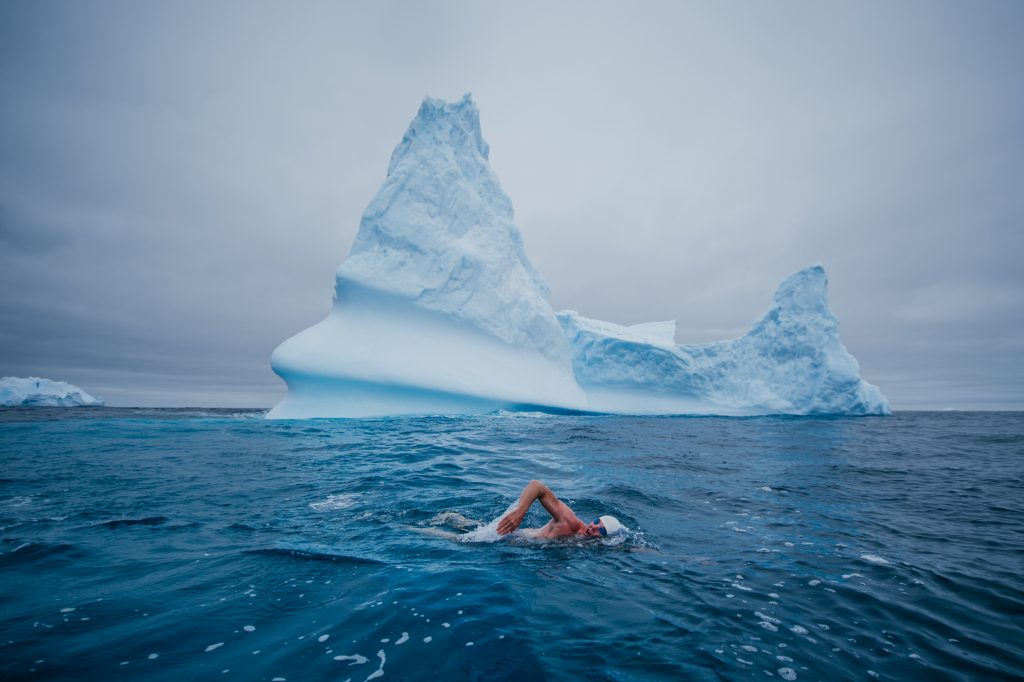 The UN Patron of the Oceans Lewis Pugh has released details of his latest polar expedition, attempting the coldest swim on Earth and the most challenging of his career. The swim will highlight the rapid melting as result of the Climate Crisis. Lewis will also call for 30% of the world’s oceans to be protected by 2030.

At the end of August, Pugh (pictured) will attempt to swim across the 10 km mouth of the Ilulissat Icefjord, which is fed by the world’s fastest moving glacier. The swim is expected to take two weeks and Pugh will be the first person to attempt a multi-day swim in the Polar Regions.

Pugh will likely swim much further than the 10 km direct distance, as he will have to navigate around icebergs and brash ice, which won’t allow for swimming in a straight line. The water will be near freezing, and the wind chill could plummet temperatures deep into negative numbers.

The Ilulissat Glacier, a UNESCO World Heritage Site, moves at an average of 30 metres per day and sometimes even faster in the summer. The glacier calves an average of 30 cubic kilometres of ice into the sea every year. It produces 10% of all Greenland’s icebergs, some over 1 km tall and including, legend has it, the one that sank the Titanic.

If the entire Greenland Ice Sheet were to melt, it would lead to a global sea level rise of over seven metres. Any sea-level rise will be devastating; one billion people live less than 10 metres above sea level. Just a one-metre rise would drown major cities like London, Tokyo and New York.

Why here, why now?

There’s no better place in the world than Greenland to demonstrate the dramatic impact of the Climate Crisis. Lewis will once again put his life on the line to demonstrate to world leaders the speed of Global Warming.

The length of the swim, and the extreme conditions of the Ilulissat Icefjord. will ensure this will be the toughest swim of Lewis’ life.

Lewis Pugh commented: “What happens in the Arctic will determine the future of our planet and everything that lives on it. The Polar Regions are feeling the effects of the Climate Crisis more dramatically than anywhere else on Earth. If temperatures continue to increase, the polar ice caps will melt and sea levels will rise. Unless we take urgent action to decrease global temperatures by seriously lowering our global CO2 emissions, low-lying islands and coastal cities will, quite literally, drown. The devastation of the natural world will affect every single person, every future generation and every creature, great and small, on this planet.”

Marine Protected Areas (MPAs) make the oceans more resilient to climate change. At the UN Climate Conference (COP26) in Glasgow this November, Lewis will also call for 30% of the world’s oceans to be protected by 2030, stressing to world leaders the role healthy oceans play in mitigating climate change.

He will ask them to move beyond long-term commitments toward immediate urgent action.

To prepare for this challenge, Lewis is currently training in Iceland as part of his cold-water adaptation programme.

In the final days prior to the swim, Lewis will move his training to Greenland. The swim is expected to start 25th August and end two weeks later on 5th September.

Commenting on the preparations of his training and swim, Lewis Pugh said: “This swim will be the most challenging of my career. The cold-water adaptation and training alone is gruelling and extremely intense on the body. But there is a reason I’m doing this.

“We are an ice-dependent species. Ice keeps our planet cool enough for us to live. The Polar Regions and high-altitude glaciers are melting, and our collective survival is on the line. No ice, no life.”

During the expedition, the team will be able to share live action with the world’s media.

Following completion of the swim, Lewis will travel to London for media interviews and discussions with key leaders before attending COP26 in Glasgow in November.

This swim has been made possible with the support of our lead sponsors Legal & General Investment Management (LGIM), one of Europe’s largest asset managers and a major global investor who has consistently received A+ rankings for responsible investment strategy and active ownership by the UN-backed Principles for Responsible Investment (UN PRI).

Michelle Scrimgeour, CEO, LGIM and Co-Chair of the COP26 Business Leaders Group, said: “We are delighted to be supporting Lewis as he embarks on this extraordinary challenge; he has worked tirelessly to prepare for the most difficult swim of his career and we all wish him the very best of luck. Through this endurance swim and his focus on biodiversity, Lewis shares a common purpose with LGIM: our goal is to create a better future through responsible investing. Lewis has witnessed first-hand the damaging effects of climate change and in Greenland he will be highlighting once again the precarious state of our natural world. Climate change remains the number one challenge for us today. I am determined that we will do all that we can to tackle this. Inaction is not an option.”

1 in 5 employers do not offer any form of support for newly ill or injured staff, research reveals