According to new research by Uswitch, 40% of households wrongly believe the Energy Price Guarantee means their energy bills can’t exceed £2,500.

Almost two in five households (38%) wrongly believe that the Government’s energy price guarantee means their bills cannot go above £2,500, according to new research from Uswitch.com, the comparison and switching service.

The measures announced by Prime Minister Liz Truss on September 8 will support people with their energy bills, and avoid the nightmare scenario of Ofgem’s price cap soaring to a planned £3,549.

Following the announcement, one in five (20%) say they feel confident about paying energy bills, and don’t think they will need to adjust their budgeting.

However, the announcement has caused confusion, with two in five households (38%) not understanding that the £2,500 figure is an illustration of an average household’s yearly bill, and not a fixed upper limit.

Taking into account the previously announced £400 energy bill support, households could still pay on average £237 more for energy over the three coldest months than they did last year.

A third (37%) of households still feel anxious that they will not be able to pay their energy bills this winter while over a third (36%) say they will need to make adjustments to keep up.

One in five households (39%) believe they will only cope with rising bills by cutting back on non-essential purchases.

Top 10 ways households are addressing the rising cost of living 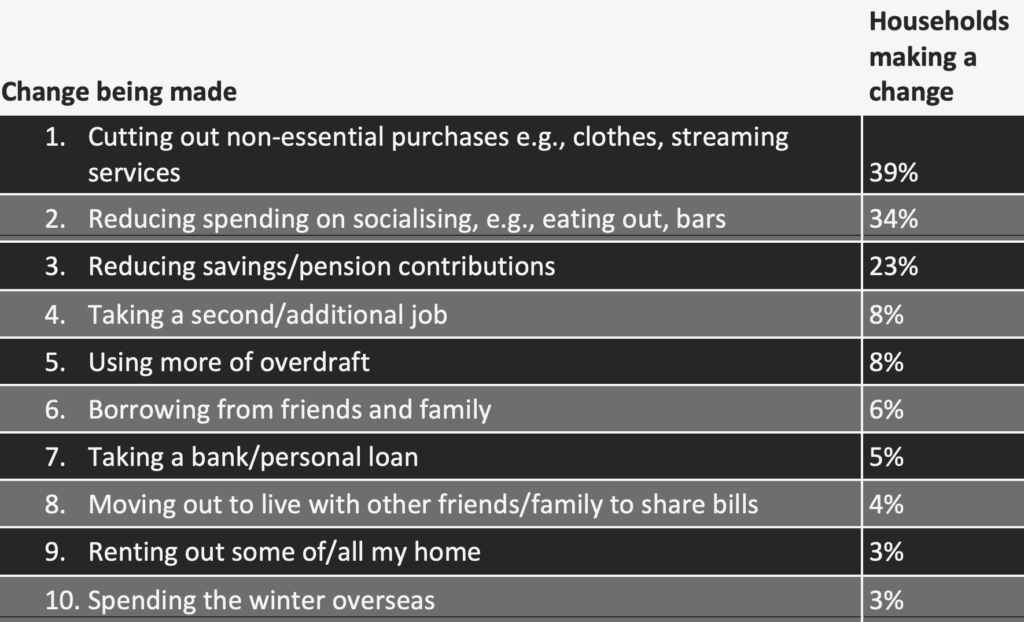 “The Government’s measures will support a lot of households through the winter, but there is still a lot of confusion about what has been announced.”

“It is important to remember that the price guarantee of £2,500 is only an average bill – so you will pay more if you use more energy.”

“It’s possible the announcement has created a false sense of security for some, especially for larger households who may pay significantly more this winter.

“It’s really important that households track their energy and cut their usage where possible – as well as keep an eye on all household spending.

“At the moment you might not be able to save when it comes to your energy, but it’s still possible to cut costs across your other household bills.

“Reviewing your broadband, TV and mobile contracts, especially if you are out of contract, could be a quick and simple way to reduce your monthly outgoings. For example, broadband users whose deal has expired can save £162 a year by switching to a new package.”

Find out how to save on your household bills here.