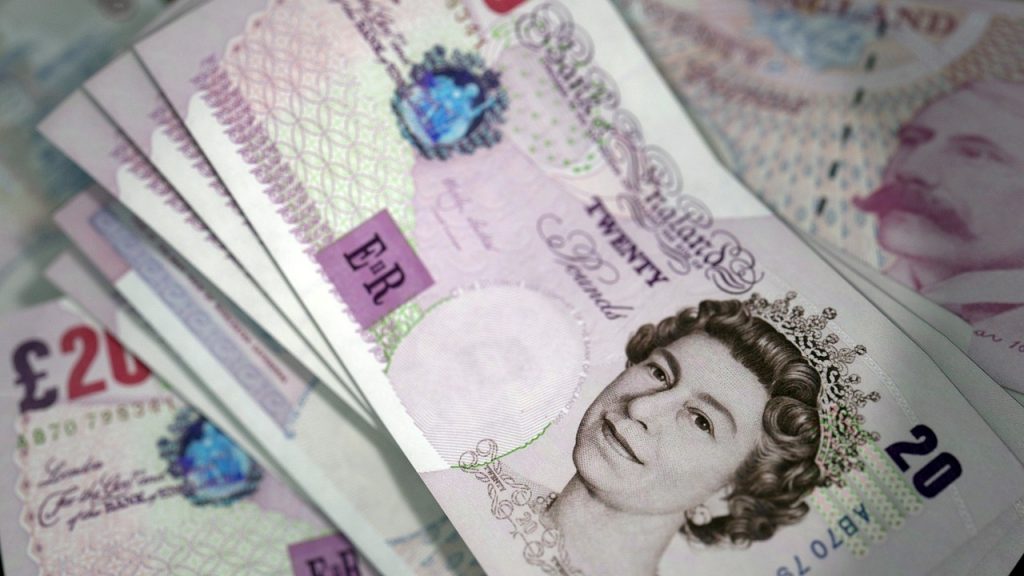 The start of the Covid pandemic in early 2020 had an enormous impact on household behaviour. With stores, bars and restaurants closed, travel next to impossible and consumers often unwilling to risk infection, consumption spending collapsed. In the US, various government support programs boosted personal disposable income, leading to a surge in the personal saving rate to over 30% in April last year. The personal saving rate remained well above 10% during the rest of the year and rose sharply again in January and March 2021 reflecting new income support measures.

But saving has increased in other economies as well. In the eurozone and the UK, consumption and income growth both fell in the second quarter of 2020 despite government programs to support the economy. Interestingly, the decline was most severe in the UK. In the eurozone, the downswing was more severe in the ‘periphery’ than in the ‘core’ countries.

At least four factors appear to have played a role in causing the large decline in consumption:

1. With lockdowns leading to the closures of stores, restaurants and bars, often for prolonged periods of time, households were simply unable to purchase goods and services.

2. Because of the lockdown and working from home, the need for certain goods and services declined, such as the need for transportation to work or business attire. While the demand for other goods, including prepared meals for home consumption and equipment for home offices rose, the net effect was to reduce spending.

3. The risk of catching the virus led households to refrain from non-essential trips to stores and restaurants, cafés etc., leading to a reduction of spending.

4. Concerns about becoming unemployed or being unable to work for a longer period for health reasons caused a rise in desired saving. For instance, data from the Bundesbank’s Online Panel of German Households in August 2020 provides an indication of the relative importance of these factors during the spring of 2020.

The increase in saving during the pandemic is often referred to as excess or forced, but that is too simple an explanation. For instance, an inability to buy goods because stores were closed during the lockdown – which was the main driver of saving early in the pandemic – may, indeed, be thought of as forced saving. But the fact that households’ needs for some goods and services were reduced and that some were unwilling to run the risk of illness by visiting a store or restaurant are not signs of disequilibrium. And saving due to concerns about unemployment, which appears to have played a small but not unimportant role at least in the eurozone, is best seen as precautionary saving.

These distinctions matter because the notion of forced saving suggests that households will want to spend all the saved funds quickly once they are able to do so. But rather than focusing on whether the increase in savings occurred because households were unable to spend or did not want to do so, it is better to think of these savings in terms of their wealth effects.

Households who win on the lottery tend to spend their winnings by increasing current but also future consumption, and by paying down debt, including mortgages, credit card debt and car loans. It seems likely that households will react similarly in the current situation.

Households purchase durable goods, such as washing machines or cars, because of the services they provide, often for many years or even decades. An increase in wealth raises the demand for these services and will therefore lead to a temporary surge of purchases of these goods.

By contrast, purchases of non-durable goods, such as food, are unlikely to rise sharply. Some services, such as restaurant meals, are likely to show a temporary but perhaps protracted increase as households compensate for not having been able to see friends and family during the pandemic. Other services, such as haircuts or insurance, will not.

Figure 3 shows that recent US data on consumption expenditures are compatible with the idea that much of the increase in consumption spending during the reopening of the economy will fall on durables and services. 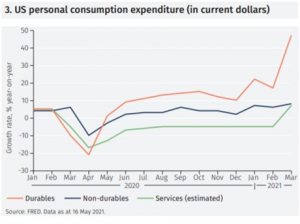 The wealth effect also suggests that households will want to increase future spending. That is one reason why they are unlikely to spend all their current savings. Furthermore, the fact that they are likely to want to reduce their indebtedness also implies that consumption is not likely to rise one-for-one with households’ savings.

In addition to these general considerations, two other factors also suggest that only a part of the savings will be spent on consumption in the next few quarters. First, some of the increase in saving was likely due to households worrying about their financial conditions and the risk of unemployment. It seems plausible that while these concerns may have declined, the precautionary saving motive remains relevant. Second, most of the saving was undertaken by high income households, whose propensity to spend is relatively low.

Overall, while it seems unlikely that savings will be spent quickly, as vaccination campaigns across the world lead economies to open, consumers will respond by spending some of their accumulated savings and reducing their saving rate to normal levels. Given that consumption spending is a large part of GDP, that will surely give a boost to the global economic recovery.

Over 40% of advice firms considering operating their own platform