Will new tax year and cost-of-living crisis cause a spike in pension withdrawals? Savers urged to ‘stop and think’ before accessing their retirement pot

“The start of the tax year is traditionally peak pension withdrawal season, with hundreds of thousands of savers dipping into their retirement pot – many for the very first time.

“This year is likely to see record numbers accessing their hard-earned pension pot. Spiralling inflation is already hitting household budgets and as eye-watering gas bills land at millions of Brits’ doors, it is inevitable more people will turn to their pensions to ease the immediate financial pain.

“Anyone thinking about accessing their pension for the first time or hiking withdrawals to cope with rising living costs should stop and think before making a rash decision. Accessing your retirement pot early or withdrawing too much, too soon could have disastrous consequences over the long-term.

“What’s more, the generous tax treatment on death of pensions means it often make sense for your pension to be the last asset you touch.” 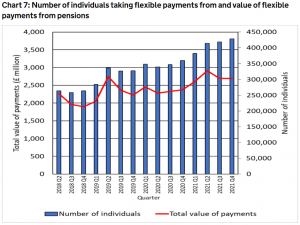 “Pensions can now be accessed flexibly from age 55 – but for most people the aim of the game remains providing an income to support their lifestyle throughout retirement.

“Withdrawing too much, too soon from your fund means you’ll increase the risk of running out of money early – and potentially being left relying on the state pension.

“Given average life expectancy for a healthy 55-year-old is in the mid-80s – with a decent chance of living well into your 90s – such an approach would clearly create a serious risk of draining your pot early.

“Put simply, if you raid your pension pot early, you’ll either need to keep your withdrawals very low – potentially harming your quality of life later in retirement – or face up to the prospect of your pot running out sooner than planned.”

“The sustainability problems created by taking an income early from your pension will be compounded if you miss out on investment growth at the same time.

“While savers have total freedom over how to invest their retirement fund, it usually makes sense to take a bit less risk when you start taking an income from your pot.

“At the very least you will need to sell some of your investments to make a withdrawal, meaning you might have somewhere between 12-24 months of income held in cash. This lower risk portfolio will inevitably have lower return expectations over the long-term.”