Aberdeen Standard Investments Research Institute (ASIRI) has created a Gender Equality Index that ranks and scores 29 developed countries across a wide range of economic, policy and ‘empowerment’ factors, and surprising information about the continuing inequality between the sexes has been revealed.

The index scores countries out of 100 based on specific measures that show: the current economic situation for women, the policies in place to support equality, plus an ‘empowerment’ score that measures how much business and political opportunity and involvement there is for women. 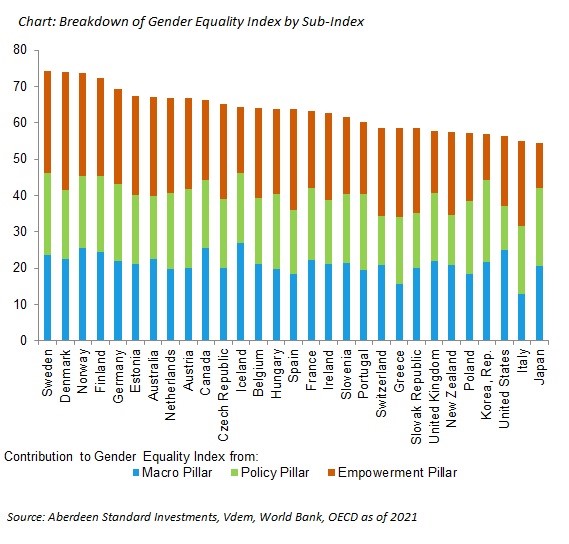 The index is designed to aid investment decision-making based on a country’s gender equality, and whether or not it is improving; it highlights the different reasons for inequality between countries and  pinpoints how equality can be bettered in ways that are appropriate for each individual nation.

Stephanie Kelly, Deputy Head of ASIRI, said, “The aim is to identify the economies likely to benefit from greater gender equality, because they will have better economic outcomes and could offer better investment opportunities.

“This is our first year of creating the index, so it will be really interesting to see how countries improve or if the pandemic, for example, sets gender equality back.

“The very specific measures we have used make it easy for investors to see what can be improved and where. This will also make it easy to track improvements, or steps backward in subsequent years.”

The index takes three particular areas into account in the scoring: the economic macro fundamentals of every country, the policies concerning gender equality, and an ‘empowerment’ scoring system.

The macro fundamentals are six important indicators that include: women’s participation in the workforce, female education, and the gaps in part-time working, unemployment and self-employment. To measure policies, ASIRI looked at seven areas including: maternity and paternity leave, the tax burden on parents, both single and married, employment protection and childcare costs for both single and married parents.

For empowerment, which is more of a cultural measurement, there are four indicators: involvement and representation in politics, access to state jobs and business opportunities, plus the protection in place for pay and work equality.

Stephanie added, “The macro-economic information tells us where a country is right now. The policy and empowerment information gives us clues about the future trajectory for a country.

“We want to grow the understanding that gender equality really is fundamental for a country’s growth and development. Hopefully, we can also highlight where a country needs to make improvements.”

Boosting female participation in the workforce, which is lower than male participation in all OECD economies, could reverse sluggish productivity growth. The crucial ways to boost equality are: giving men paternity leave, reforming the tax wedge on second earners and sole parents, considering the quality not just quantity of female work – so flexible working doesn’t lead to a lack of career progression – and having more data on equality.

Survey: Essentially no IFA would recommend cryptocurrencies or meme stocks

Resonance ‘Everyone In’ Fund Raises £16.5m to Help Tackle Rough Sleeping in London

Inflation: What do the experts think?

Published ten times a year, IFA Magazine has been winning a keen and enthusiastic following among Britain’s premier financial advisers, planners and paraplanners.