Emerging market bonds in the time of coronavirus

by Spencer Freitas
in News

Emerging markets have recently seen other impacts than the tragic ones of COVID-19 outbreaks on their societies and economies, with spreads widening considerably. Three factors have been at play. First, was a rapid sell-off in global stock markets that followed the realisation that the global economy is heading for a recession. Second, investors shifted to intense risk aversion and the demand was for US dollar cash buffers. Cash became king, overlooking many typical safe-haven assets. Third, was the breaking up of the OPEC+ agreements, that sent global oil prices — already weak from lower demand — into a tailspin.  What is bad for oil is terrible for oil producers (see our recent blog), but it also tends to be a drag on all emerging markets: while oil-importers get some trade balance relief, they also tend to face higher costs of borrowing and the effects of weaker market sentiment.

Investment grade spreads are above the peaks of any recent bout of market volatility with a speed unmatched since the global financial crisis. Emerging market higher yield bonds soared in similar fashion, through a 1,000 basis point threshold above US Treasuries. 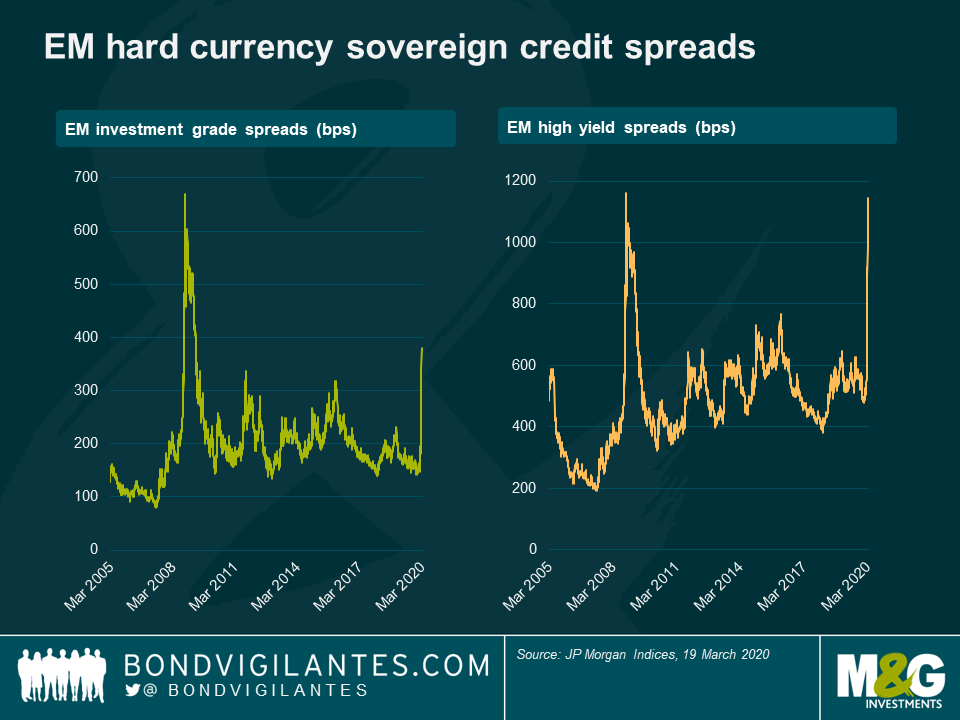 The potency of the market’s risk aversion was illustrated by record single-week outflows from emerging market bond funds. These outflows reduced the level of both hard currency and local currency investment, with both selling aggressively. To put the speed and intensity of the move into context it is worth comparing it to 2008. 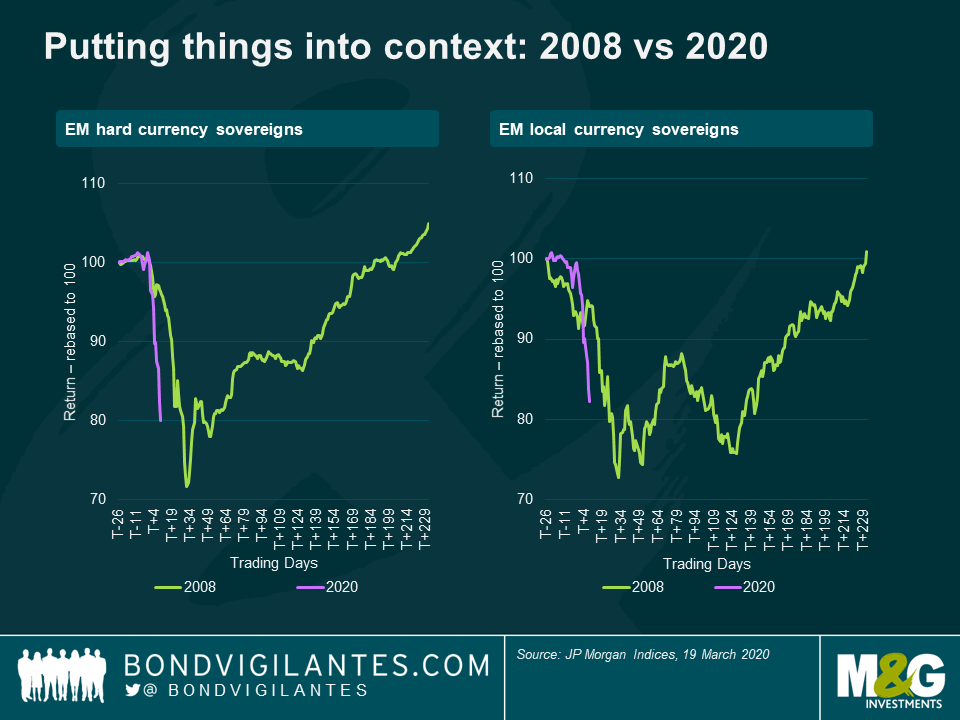 So where does it leave us? It might still be soon to know how long this will last, but historically, a year of negative performance — of the emerging market hard currency sovereign bond index — is followed by strong positive returns the next year. While history is no guide to the future, it suggests that investors might look to reposition money pulled from emerging markets once risk aversion becomes less intense. 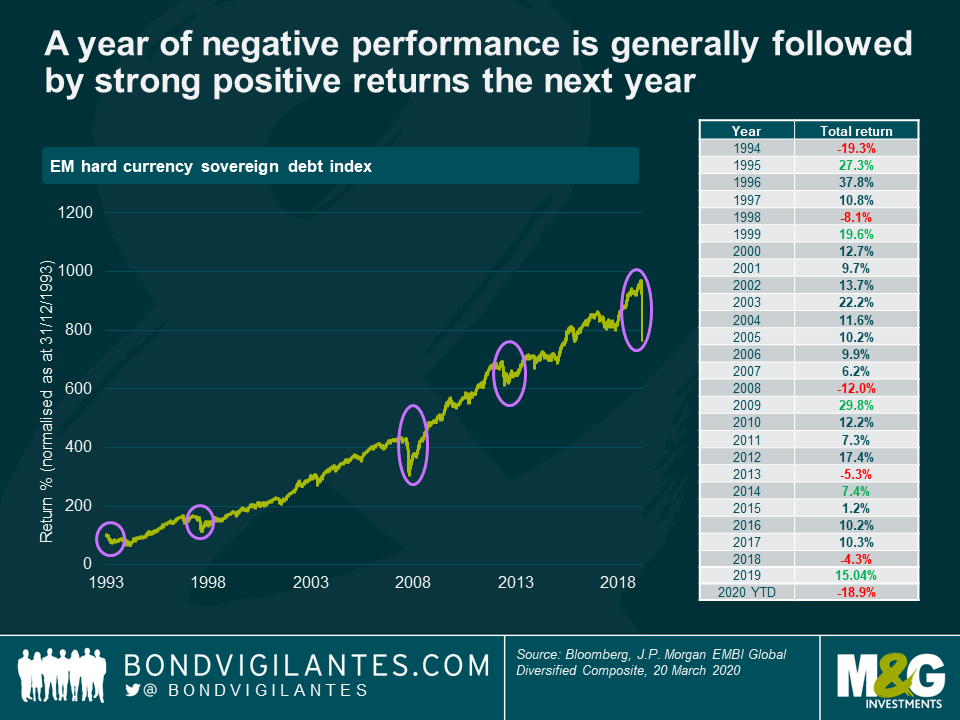 Emerging markets are feeling the direct economic, social and health impacts of COVID-19 outbreaks, plus the demand shock from their efforts to shut down and restrict the spread of the virus. Negative impacts are also being channelled via reduced travel and tourism sector earnings, constrained trade, and lower remittances; each exacerbated where there is a reliance on exporting commodities whose prices have been softened by the global recession.

While the impacts are considerable, the global response is also bold. Emerging markets are joining advanced economy central banks and governments in announcing huge monetary and fiscal stimulus. Even where emerging markets are already running high deficits, or are reliant on foreign debt for their financing, there still should be some cavalry arriving. The official sector is stepping up its assistance in light of COVID-19, including from recent multi-billion initiatives announced by the IMF and World Bank. If sufficient, these efforts will encourage investors to shift from current risk aversion, in turn helping to ease the liquidity situation. 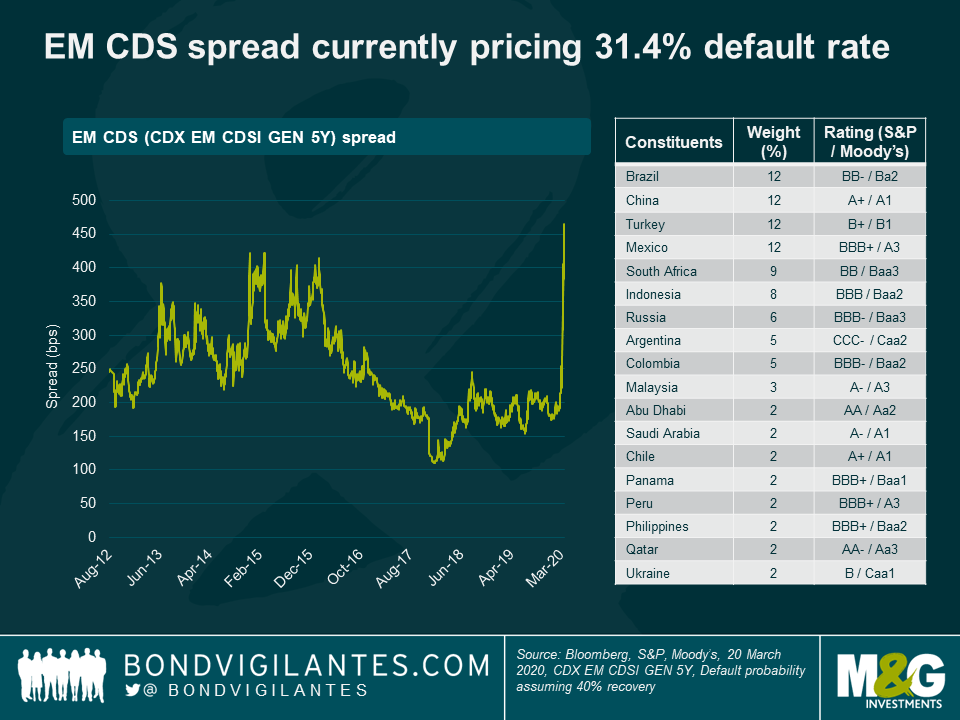 The core characteristics and differentiators of impact investing

ARIE Capital Technology EIS: Net4 – an update from the CEO

EIS in the spotlight

ARIE Capital Technology EIS: Net4 – an update from the CEO

EIS in the spotlight

Do NOT follow this link or you will be banned from the site!
Powered by Convert Pro