Bank rate decision: “Price of everything rising faster than an octogenarian on Viagra”

Tomorrow the Bank of England announces its latest bank rate decision. The expectation is for another quarter percent increase. But is it the right thing to do? Ian Hewett, who runs The Bearded Broker, is not convinced: “With the price of everything rising faster than an octogenarian on Viagra, I think it would be churlish for the Bank of England to raise rates, as much as controlling inflation is its remit. Increases in fuel, food, utilities and then mortgage payments will make things very tough for lots of people.”

Alastair Hoyne, managing director at specialist broker, Finanze, is also sceptical, but acknowledges Threadneedle Street’s dilemma: “Should the Bank of England raise interest rates? Without a shadow of a doubt, yes. Can consumers and households afford it? No, far from it. Households are so leveraged that rate rises, even small ones, have the ability to cripple people financially. They’re hanging over the average household like the Sword of Damocles and the Monetary Policy Committee knows it. The Bank of England is in an almost impossible position.”

Marcus Wright at Bolton Business Finance believes the Bank of England ultimately has its hands tied, as tough as the decision is and as futile as it may be: “Most people in the finance industry are expecting a rate rise this week to try and dampen rampant inflation. However, it’s not clear that this will help with our mainly Covid-related hangover of supply chain shortages and an energy crisis created from years of bad energy policy. Adding to the cost of borrowing now will hurt many small businesses and households, but it’s likely the Bank of England will feel it has no choice.”

Scott Gallacher, a chartered financial planner at Leicestershire-based independent financial advisers, Rowley Turton, is also unconvinced rate rises will achieve much given the causes of inflation: “Increasing interest rates to control inflation is the wrong policy at the wrong time. Current UK inflation is primarily being driven by external international factors such as rising gas and oil prices and Chinese supply issues due to Covid. So trying to dampen domestic demand, and therefore inflation, by increasing interest rates seems naive at best. The cost of living crisis will more than dampen UK consumer demand. And UK consumers don’t need a double whammy of rising mortgage payments and rising bills.”

Adrian Kidd, chartered wealth manager at Aylesbury-based EQ Financial Planning, also has his doubts: “There are huge economic decisions to be made right now and the terrible situation in the Ukraine has muddied the waters further. I hope the Bank of England chooses to sit tight as too much tightening will lead to an even worse fate, namely recession. A further squeeze on the consumer isn’t necessary right now in my view.”

Rob Gill of Altura Mortgage Finance is also concerned about the impact of rates rises on the economy: “The Bank of England is stuck between a rock and a hard place as it seeks to balance the importance of combatting inflation with the risk of choking off economic recovery. Higher fuel bills and taxation are already set to hit households with a double-whammy in April. Making it a hat-trick of higher mortgage payments is not without risk to an economy still recovering from the pandemic and facing the uncertainly of a war in Europe.”

Dominik Lipnicki, director of Your Mortgage Decisions, is also unsure that rate hikes will achieve much: “There are specific reasons for the current inflation we’re seeing and raising the Bank of England base rate now will do very little to fix the problem. We have all seen huge energy price increases and more are yet to come. Coupled with the upcoming National Insurance hike, many people are already having to choose between heating and eating. By increasing their mortgage payments, this financial strain will only become more severe. Most agree that we have a very tough year ahead, and raising rates now is not the answer.”

Scott Taylor-Barr of Shropshire-based broker, Carl Summers Financial Services, is of much the same view: “Is adding to what is widely touted as the biggest decrease in our standard of living for decades by increasing interest rates really that helpful? Inflation isn’t rising because we’re all feeling flush and spending our money on luxuries, it’s rising because the essentials of life are all skyrocketing. Fingers crossed that the Monetary Policy Committee sees that and doesn’t add to the misery, as increasing people’s mortgage payments isn’t going to bring down the price of petrol.”

However, Graham Cox, founder of the Bristol-based Self-Employed Mortgage Hub, believes we need to swallow the rate rise medicine, as sour as it will taste: “As much as it adds to the existing pain, I do think we need to wean the economy off its dependence on ultra-low interest rates. Inflation is running riot and could remain high for a couple of years. It will cause huge damage to the economy if we’re not careful.”

What we can all agree on is that the Bank of England is facing one hell of a decision. 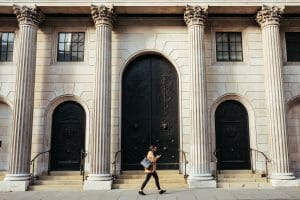